The Khunerjab pass is the highest paved border crossing, and the highest ATM, in the world. Unfortunately you are unable to cycle over it from China to Pakistan. On planning the trip I nonchalantly agreed to turn around and cycle up to the pass once we arrived at the Pakistan border point in Sust. The bus journey from China, down the road we would soon be cycling back up, wiped away this nonchalance with nerves and excitement. 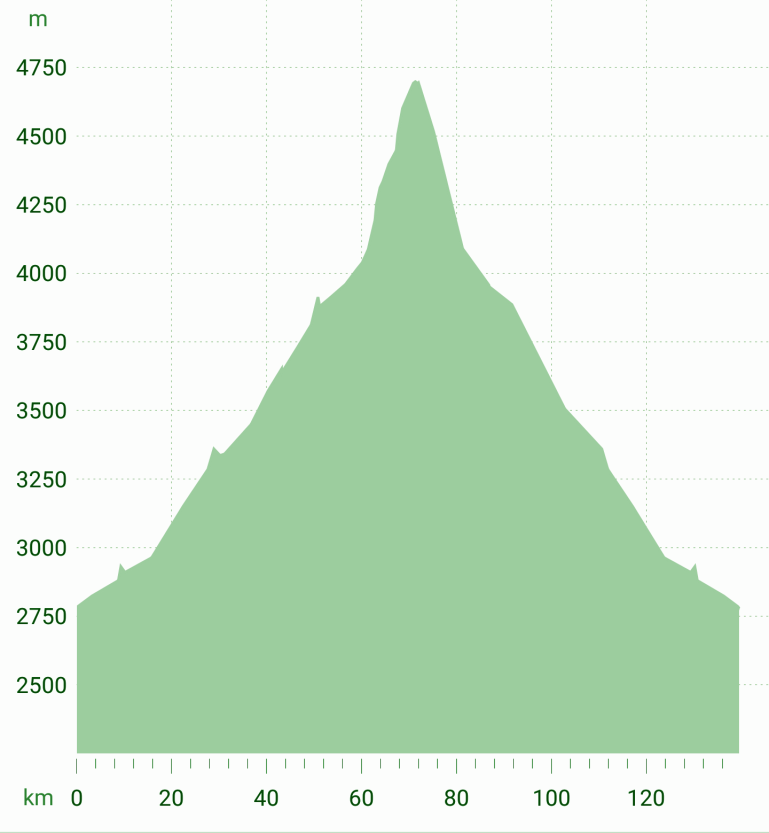 After some research we split the ride in two: a 30km ride from Sust to the police checkpoint/campsite then a 130km ride to the top and back down to Sust. This meant a 50km ascent then a 80km descent. We knew we were in for a long, tough ride. 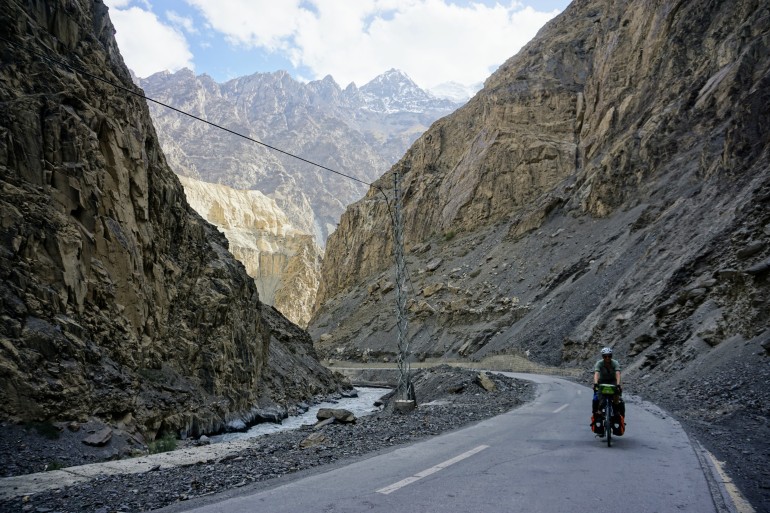 No Argonauts or gods

The first day was a breeze, a jolly jaunt through winding roads enclosed by walls of rock. As a kid I fell in love with Jason and the Argonauts whilst sitting with my Aunty Ann: here I felt like Jason having to pass through the clashing rocks, except I didn’t need (or have the option of) help from the gods.

On arrival at the checkpoint for entry into the Khunerjab National Park, we saw the sign that said campsite available and enquired about camping. ‘No camping’ the official said, on being made aware of his own sign he then informed us camping is available. This turned into the most bureaucratic check in process I’ve undertaken and a signifier for the general situation in Pakistan. I first had to go get official permission from the person who lived in the grand lodge. ‘please sir, can we camp?’ squeaked my mouth. ‘Yes but you need to get security permission from the army down the road.’ So off I was sent walking down the road to the army checkpoint, desperately trying to remember the grand lodge guy’s name.

At these checkpoints there always seems to be more people than necessary. As I had forgotten his name by the time I got there I retorted back to ‘please sir, can we camp?’ routine. A finger pointed me to the villa round the corner where I could see a group of army men huddled round a table. Off I went again, unsure who and what I was asking for, I approached cautiously, mostly due to intimidation of men in uniform. I squeaked out the words again only to be shouted at by some bloke ‘you can not camp pass this checkpoint you will camp here tonight’. Perfect. This type of situation has arisen multiple times during our time in Pakistan – the word security is used as justification about why something has to be and ultimately means the army have some control. To ask why is futile, something I find hard not to do. Regardless of this, the army people at the checkpoints are usually good spirited and typically more interested in what fun you’ve been up to rather than telling you what to do.

At the campsite (car park) Luke cooked up a curry storm and went onto insult the guy who lives in the grand lodge by guessing his age as ten years his senior (he was in his early 30s). We left early in the morning after cake for breakfast to begin our climb. 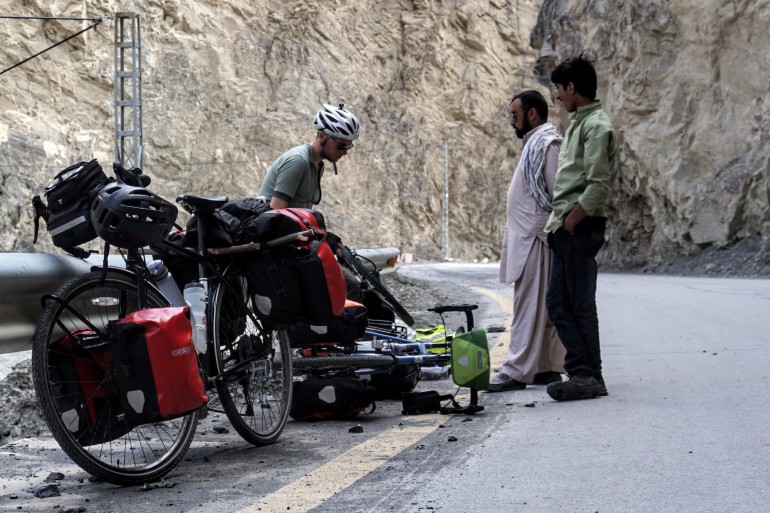 We knew we were in for a long day but thanks to China the road condition is good, apart from the screw someone left by the side of the road that gave me a puncture. This occurred by the only set of construction workers on the entire road, who provided a shadow as I went to work. One made me laugh as he was kitted out in a top that said commando, ‘lol’, I thought, ‘he thinks he is a commando in the anti terrorism squad’, then I saw his automatic rifle so took his pronouncement more seriously. Turns out Chinese workers were there so they get the extra protection. 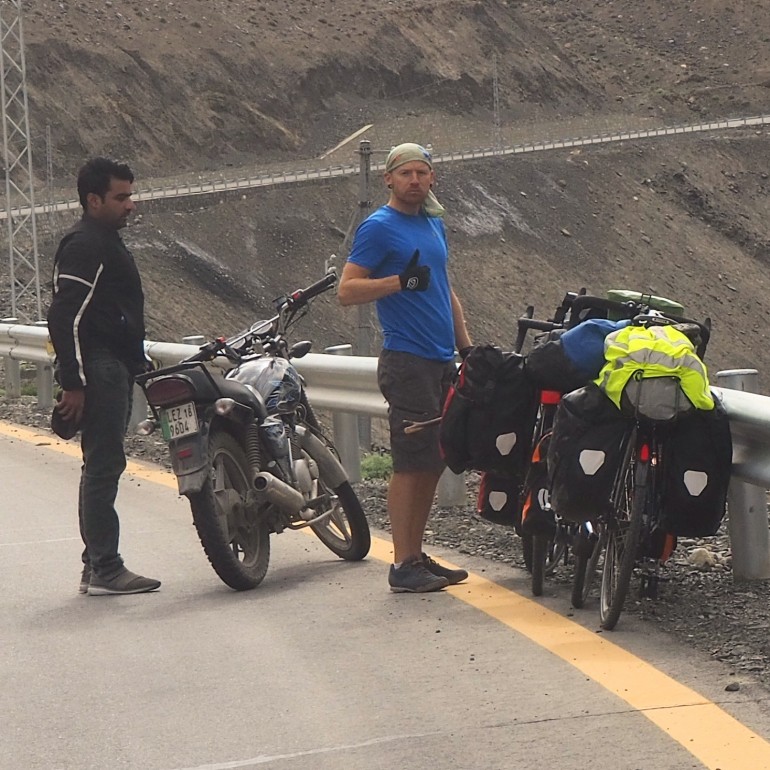 After entertaining them for a little while we set off. As we winded up the road we were getting our first experience of the attention we’d receive as we cycle through Pakistan: regardless of the gradient cars and motorbikes would drive past, shouting, ‘how are you? Where are you from? One selfie, one selfie!’. This ultimately meant one selfie for everyone in the car; this meant a lot of selfies as Pakistani’s treat their cars like clowns. Whilst friendly, not what want as your trying to keep rhythm as you climb. 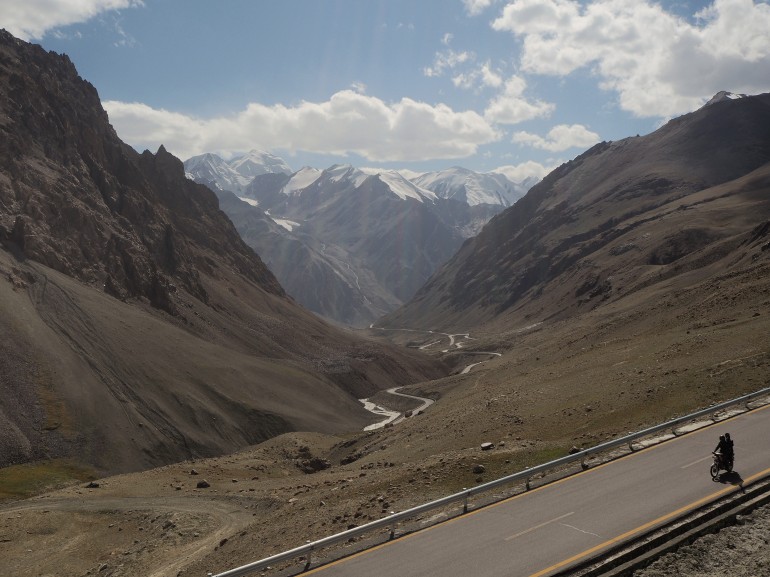 The ascent reached its climax as we hit the switch backs, all 13 of them. With 10km to go and 800m still to climb, like Hannah Montana transforming into Miley Cyrus, I entered a dark phase: ‘what’s so special about this pass anyway?’ I pondered, ‘I should probably turn back’, however, like Miley, I had plenty of thrust. With my cadence quicker than the thoughts could materialise the darkness soon drifted away. 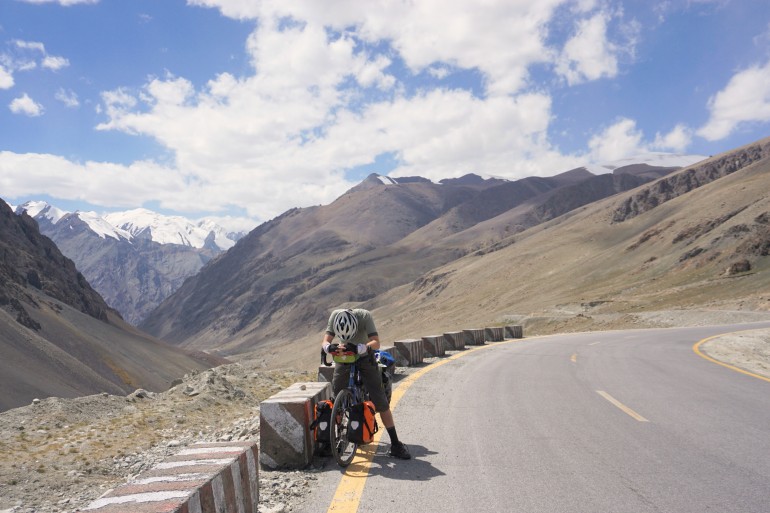 The biggest mistake we made was thinking the pass was just after the switch backs. This created mental pain as the little winding road, that keeps the top of the pass hidden until the last few hundred metres, seemed incredibly long. 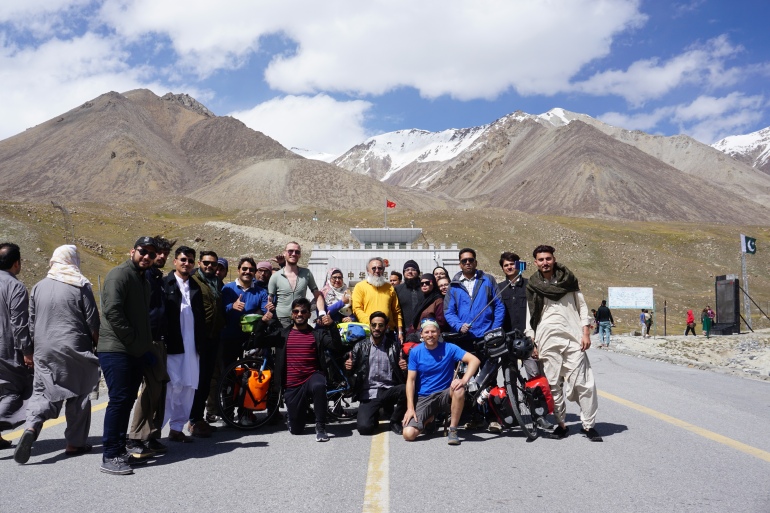 Once there, and Luke had persuaded the guard to let us through to the monothlic structure at the border with our bikes, my face was one beaming smile. This was fortunate as our celebrity status was taken to the next level and we were appearing in hundreds of our fans’ selfies. 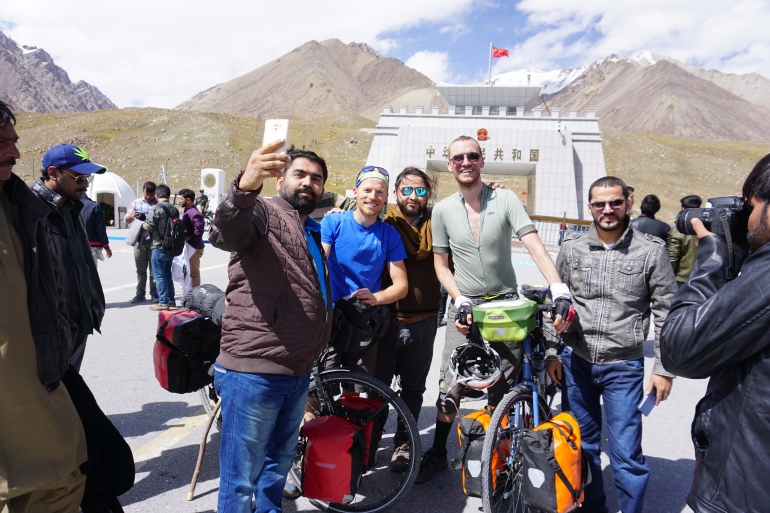 After the jubilation came the cold realisation that we had 80km left to do with darkness only a few hours away. We swepted down the switch backs with pleasure and stopped for porridge with about 60km left. A head wind had picked up and darkness was on our shoulder. We drafted down the hill side, letting out shouts of joy as we swepted through the steep mountain sides. It made me think of my Mum’s trifle pudding, not the crusty dryness, but as your race down to the bottom layers of pleasure are continually revealed.

Darkness was now on the horizon but progress was halted as I experienced a blow out. My first ever one. Fortunately, it didn’t blow my tyre off the rim, rubber, rather than metal, to the ground prevented the road turning into an ice rink and me falling like an ice skater. This did mean another inner tube change and, as always, an audience soon appeared. The time lost meant it was now pitch black to ride out of the mountains on a road littered with rocks and holes. With lights mounted, Luke became Rudolph. The scariest part was a big dog’s bark getting louder and louder and louder from the pitch black roadside.

We arrived back in Sust after 13 hours out on our bikes, like any long trip our minds and bodies were a mess. We wolfed down a double portion of food and climbed into bed. Then we ate some Walker crisps before we slept.

The nerves and excitement were well placed: to be enclosed by such high steep rock on a small, winding road up into the mountains creates a continuous sense of insignificance. I would recommend anyone who comes from the China side to turn round and cycle back up to the top. The restriction on camping makes it a long day, but the rewarding climb is topped off with an exhilarating race round and through the steep mountain sides.